From Author to Authory: My Take On A New Tool for Journalists

From Author to Authory: My Take On A New Tool for Journalists 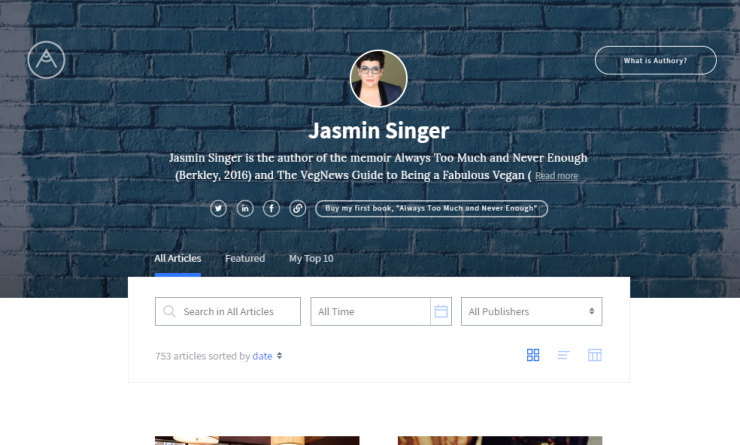 I published my first poem in a magazine when I was in fourth grade, circa 1987. It was entitled “You’re Still a Person” and was basically about how “it doesn’t matter if you’re red, purple, green or blue; you’re still a person, and you should be treated as one, too.” Though I certainly couldn’t have articulated it this way at the time, even my earliest scribblings were about the same topics I ultimately centered my career around: social justice, equity, radical self-acceptance, and compassion. As a chubby little kid who had to navigate my way around the bullies who chose me as their target early on, the deep satisfaction of seeing my name in print—in some kids-themed magazine with an electric pink “you write it!” section at the back—had me completely hooked. I knew immediately I wanted to be a writer, though the magical, life-predictive M.A.S.H. games I played also swore up and down I’d be an actress, too (and would live between a mansion in Beverly Hills and an apartment in Greenwich Village, but I digress).

Since that fateful day when my poem appeared in a glossy magazine in my mailbox 33 years ago, I have gone on to write and edit thousands of stories which have appeared both online and in print; I have published a memoir (detailing, amongst other things, the bullying I underwent when I was that little kid) and went on a 60-city tour with my book; I wrote another book (a vegan how-to) dropping later this year; I was the senior editor at a renowned national magazine, and when I went freelance, I stayed on as the senior features editor; I have become a love columnist; and I co-founded and run a now decade-old media nonprofit where I have interviewed countless celebrities and activists and received a handful of really cool awards. I never wound up living in a mansion in Beverly Hills, but I do live in a one-bedroom in neighboring West Hollywood, so that kind of counts, right?

Dreaded vortex of lost words
Of course, little did I know then that the internet age that was about to envelop all of us would, on one hand, open up worlds of possibility to me in terms of what I could write and publish—but on the other hand it meant that my years of writing would disappear into the dreaded vortex of lost words. I’ve been writing professionally for over 15 years now, and I probably recall only a tiny fraction of the outlets I’ve written for. I wish I could go back in time and keep a running list of articles I’ve published, or at least a file folder on my desktop somewhere—though I have no doubt that folder would have also been a victim to my incredibly disorganized “tracking system” that has resulted in thousands of lost files, probably stuck in some hellish digital space where it will never be clicked on again.

Enter Authory. Authory is a program designed with journalists and bloggers in mind—especially people like me who have lost track of their stories but would ideally want to find them and house them in one cleverly designed, user-friendly space. That’s what Authory is, in a nutshell: it creates a digital portfolio of your writing, packages it in a simple and easy-to-digest package, and allows you to categorize your articles (such as by choosing to highlight your own curated top-ten list and put it on a separate tab, which I did). 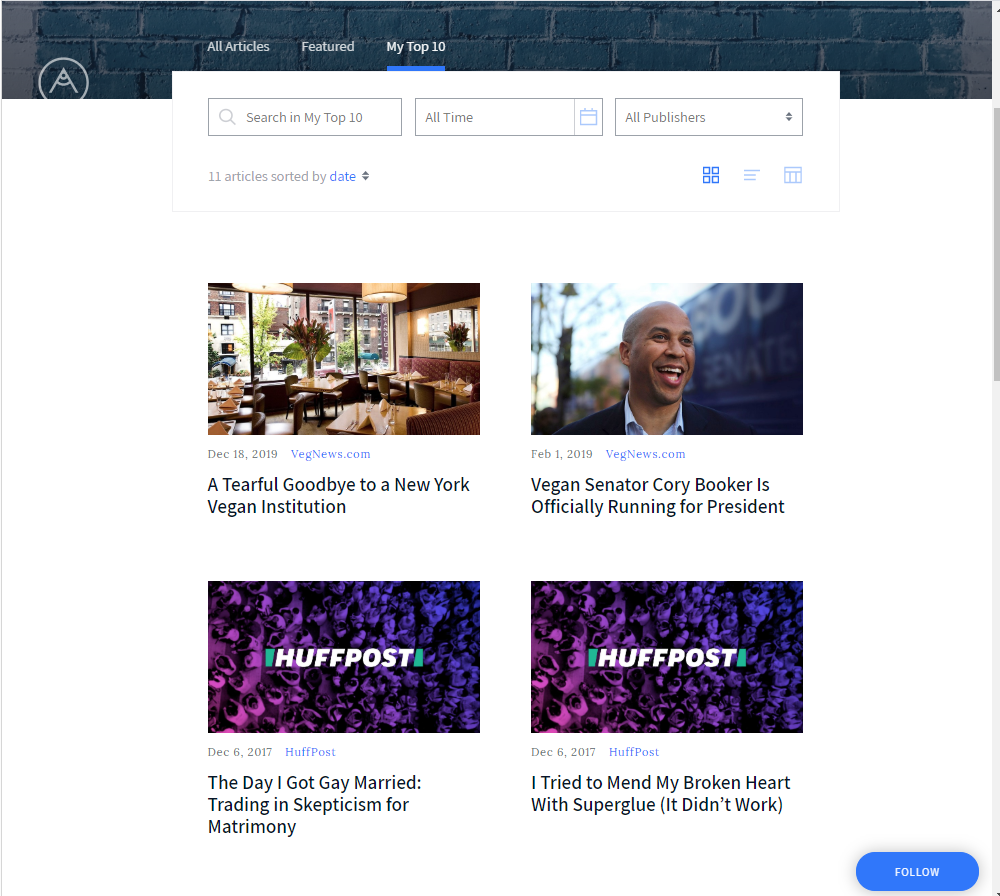 No search function exists inside my head
Despite my career largely being centered around digital media, I give myself a B- when it comes to understanding even seemingly simple apps and programs. So I have been impressed by the accessibility of Authory, and have found it gratifying to tinker around there—choosing the visual format that presents my articles with large photos as opposed to just a list; making my short bio link to my first book (I appreciated the simplicity of choosing only one thing to link to, though all of my social media handles are also easy to reach with Authory); and changing the way I sort the articles (total shares versus most recent).

That said, that giant abyss of lost stories and files I mentioned earlier is still a bit of an issue, even with this clever program. That’s because ultimately I have to remember where I am bylined, and pretty much every day I think of a new place. Even since writing this, I recalled that I had an article on MindBodyGreen go totally viral several years back, ultimately leading to my first book deal. These are the huge pieces of information that slip out of my mind, and I’m afraid that no search function exists inside my head—not even Authory can fix that.

During those rare moments when I can recall my writing resume, I simply type in “add article” to my Authory backend, type in the main URL for the outlet, and within 48 hours, it appears on my page. Since I’m a person who gets her kicks from instant gratification, this waiting period—though indeed humane and understandable—can make me antsy (such as right now, since I just remembered about that MindBodyGreen piece and I feel like the world might end if it doesn’t go up immediately). I blame my impatience on the “just Google it” culture, though even Google can’t find all of my old articles, so clearly I need to make sure that perfect doesn’t become the enemy of the good. Because Authory is very, very good. The problems I have with it are the problems I have with everything; I am the fallible one, and no website can fix that, annoyingly.

Making me look more impressive than I actually am
Ultimately, even in the short time since I’ve started using it, Authory has become a resource for me that makes me look more impressive than I actually am, is easy to keep up with (way simpler than when I have to update my press page or another piece of content on my website), and collects pieces of my career in a way I could never manage without its automation. The customer service is pretty solid (you get the feeling you’re talking to a real person, though once again I find the day-long wait to be angst-ridden—which speaks more to my own personality flaw than anything else), and I am looking forward to playing around more with the categories. The cost is about $96 annually or $10 a month, which is way cheaper than a personal assistant or a web master. For anyone who has a handful or more articles online—and aims to get more—Authory is worth your investment.

When I think back to my eight-year-old self—that burgeoning poet who still typed on a typewriter (when she wasn’t hand-writing in giant pink loops with hearts on top of I’s)—I think she’d approve of Authory. All that little-me had wanted, according to that first piece I had published, was “someone to care.” And I get the feeling that the folks behind Authory care a whole lot.

Now if only they could work on that search function inside my head, we’d be all set.